Solutions to the challenges
of sustainable development 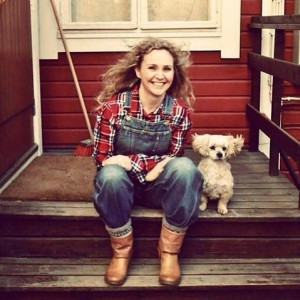 For some time I had been thinking of a trip that would combine more aspects of “travelling on land” and of course, cycling at the forefront. So when the Mänttä Art Festival was popping up again and again in my mind, I thought it would be just the perfect destination.

I transferred my bicycle to the train at 10 in the morning at Tampere railway station. My destination was Vilppula village.

The train was very small – only two wagons, lots of people on board, but my bike was the only one on the train´s bike rack.

My only luggage on this trip was a 20 liter dry baggage which included: rainwear, changing clothes, book, camera, firts aid and a hygiene bag. In addition, a camera foot and some repair equipment.

Only an hour after the train ride I was at Vilppula station. It took about 20 minutes to Mänttä, when I was already curving a narrow flower path and a wooden bridge to the first Serlachius Museum, Gösta.

This museum is the most impressive in its architecture and location, not only the exhibitions and their diversity, but also the surroundings of Gösta with it´s lush gardens and islands, surrounded by water, where the art exhibition continues.

In the courtyard you will also find the charming log house Café Autere, where I went for lunch.

Next, I took aim to another Serlachius Museum – museum Gustaf. The GPS guided my bike path along the beach, by a thin sandy path – I had arrived at Lemmenpolku / Love path, which, even in it´s intricate and intermittent rhythm, was well suited for mountain biking. But why such name?

I investigated and found the answer:” In the 1930s, Miss Europe 1934, Ester Toivonen, was often seen walking and riding on the trail while she was a guest of the Serlachius family at Joenniemi Manor. It is reported that when Ester was on the sunny summer days getting unlimited sunbathing on nearby Taavetti Island, there was an unusually large number of fishermen and other rowers on the lake.

The Mänttä villagers wondered whether the beauty queen was a friend of the cartridge, a mistress or a secret child. The museum tells us that historical sources ensure the last option is correct. ”

I appeared (about 2 km) from Love path back to the asphalt and from there to the Gustaf Museum. Again, an hour and another disappeared. I also visited the Mänttä Art Festival Art Exhibition at Pekilo, which was found a kilometer from Gustaf-museum.

By the time I had enjoyed all this art in such abundance, it was already four o’clock. It was time to go back to nature and now I was pedaling towards the green Mänttä Mountain. This high hill is a couple of kilometers from the city center and there are several points of interest on its slopes – the first was to conquer the Mäntänvuori observation tower. It was a spectacular view of the whole Mänttä from the tower! Close to the observation tower is the famous Winehouse Vuorenmaja, where I enjoyed the best schnitzel of my life, of course, with the recommended wine. Oh that was good!

Down the hill with my hair in the breeze, I quickly stopped at the shop and bought a snack for the evening. Now I was heading for a place 35 km away. There I again pedaled through Vilppula village and mostly along asphalt.

The sun was down when I finally arrived at Vehkaniemi Farm house. The old courtyard and the buildings that surround it, as well as the hens and rooster of the yard, welcomed the guest.
After the sauna and swimming at the beach sauna, I fell asleep happily in a small cabin under a warm blanket.

I ate a generous breakfast in the Vehkaniemi cabin and chatted with the farm’s hostess. The free-range chickens in the yard and the Kalle rooster, which was said to be of the royal family, so well-mannered that they let the chickens eat first, were very human and sociable.

Then back to the saddle!

I was back on the rolling sand roads and approaching the Pohjaslahti church. Getting up there required pedaling while standing. Fortunately, the church was open and I could really sense the atmosphere of that 1930s architectural creation.

Churches are a nice destination for cycling trips.

The history and pictures on these walls often reveal the story of the village and the villagers and the stages of life that might otherwise go unnoticed. Even now I got a lot of information about the history of Pohjaslahti.

Down the hill again and now I came to the village of Pohjaslahti itself.

At the heart of it is the legendary restaurant Wanha Vankka where I didn´t go yet because I wanted to see the harbor and the chapel first.

The Barn Chapel was a beautiful open-air wooden canopy with a needle-covered path to the beach. There I found another “wanderlust destination”, a small wooden altar and a cliff that offered spectacular views far beyond the back of the lake. I sat down and marveled at the sailing boats far on the lake, until hunger drove me to eat.

I immersed the fork in a hot steaming pizza, a specialty of Wanhan Vankka, and with my tummy very full I continued towards north and Virrat village.

Monoskyläntie road provided an abundance of dirt roads. It was all sandy.

Heavy rain had been promised for the whole day, but up until now, there was only a bit of lash, even though the sky was rolling over massive and gloomy clouds all along the way. Such a heaven is truly descriptive.

However, on this trip, I had to stop for a couple of minutes to keep the rain under the canopy of the barn, because I didn’t want to put on my rainwear. The cotton anorak was so comfortable and breathable and it dried also vey quikly. There I stood still and listened to the rain and breathed mercifully oxygen-rich air. No one else was in traffic.

The rain brings up pleasant things in the nature: all the scents double and the grass, the freshly cut hay, the scent of the flowers, the trees, even the peculiar aroma of the dirt road, rises to the air and intoxicates every nature traveller. The birds also seem to sing differently in the rain.. or am I just imagining. The shades of blue and humidity make the colors of the summer day sleepy.. It was a rewarding moment to photograph flowers and leaves in their dew drops after the rain had stopped.

Monoskyläntie road made a fun hump over the Naurissalmi Canal.

I stopped to eat a snack bar and study the little rapids near the canal. The place was beautiful and provided generous large wooden docks for rest. At some point after passing the search, the road had once again turned to asphalt and I was on Route 66 and very soon on the Toriseva Gorge Lakes.

This was not the first time (see I.K Inha’s Footsteps -blog) when I come here to the gorge lakes on my bike trip. But there is always something magical that makes this place so special. Nature-shaped monuments are absolutely majestic!
This time the Toriseva Coffee House was also open and I got to know the place.

Route 66 also passes the Little Gorge Lakes and when the road bends, it will eventually bring the traveler to the Virrat center.

Beautiful Virrat wooden church was just on my route and it made me want to explore it more.

The clock was in such position that I decided to head to the shore as Steamship Tarjanne was coming to the harbor. The same ship I would return to Tampere tomorrow morning. I sat down on the terrace of the beach restaurant Baarpuur and watched as an old and noble steel lady arrived to the dock. The crowd fluttering out and onto the same terrace where I was sitting. Sun blinked.

Another short bike ride (about 4 km) to Virrat Heritage Village and its yard, Youth Center Marttinen, where I would be staying over night.

When you arrive at Heritage Village, you will inevitably bypass the large gray windmill, which is a must-shoot, as you often do not found in Finland. In the center of the yard you will find many interesting things, such as the Restaurant Mikontalo, art shop and museum yard shops.

I got my room key and went to bed. What a great day!

After breakfast it is always a nice feeling to get on your bike. Of course, today’s total trip would be only 4 km from my accommodation to the Virrat quay. But no matter what the journey – there is definitely magic in the mornings. It always feels like a new adventure is about to begin. And soon, I could enjoy the ride on the Steamship Tarjanne!

There was some other bikers in the harbor aswell. As the clock struck ten, the ship loudly whistled. “Bye bye Virrat – the official Midsummer town of Finland!”

Now, one of my favorite parts was about to start: Traveling on Tarjanne. A unique feeling of nostalgia struck me throughout.
This ship was built before the Titanic and is still powered by the same original equipment. And not just that information, but all the layers and stories that are still perceptible on these walls will take the traveler of Tarjanne back in time for decades to come. Nowhere have I met a similar athmosphere.

I still remember the first time, more than 10 years ago, when I witnessed the 50th wedding anniversary of an old couple on the deck of Tarjanne. They danced quietly with the wish of the accordionist of Akseli & Elina’s wedding waltz. They had done this in exactly the same place on their first wedding day…

We fellow travelers just tried to keep our eyes dry.. Even today, the mere thought of that memory is still touching.

Even more bike tourists were picked up from the harbors along the route with their Bike & Boat -tickets and now all the clouds had vanished from sky. The sun was shining and we were sailing.

A cabinet lunch and a good book – these two are definitely worth to try! And of course, get on the deck where the accordionist plays. For then you can live something that will remain in your heart for decades.

I was soon at home.

What a wonderful trip this had been.

We use cookies on the site to ensure the functionality of our site and to improve the user experience. By using cookies, we can also offer various social media features and analyze data traffic.
Accept all Reject Edit cookies Read our privacy statement

This website uses cookies to improve your experience while you navigate through the website. Out of these, the cookies that are categorized as necessary are stored on your browser as they are essential for the working of basic functionalities of the website. We also use third-party cookies that help us analyze and understand how you use this website. These cookies will be stored in your browser only with your consent. You also have the option to opt-out of these cookies. But opting out of some of these cookies may affect your browsing experience.
Necessary Always Enabled
Necessary cookies are absolutely necessary for the proper functioning of the website. These cookies ensure basic functionality and security features of the website anonymously.
Functional
Functional cookies help perform certain functions, such as sharing website content on social media platforms, collecting feedback and other third-party features.
Analytics
Analytical cookies are used to understand how visitors interact with the website. These cookies help to provide information on the number of visitors, exit percentage, traffic source, etc.
SAVE & ACCEPT